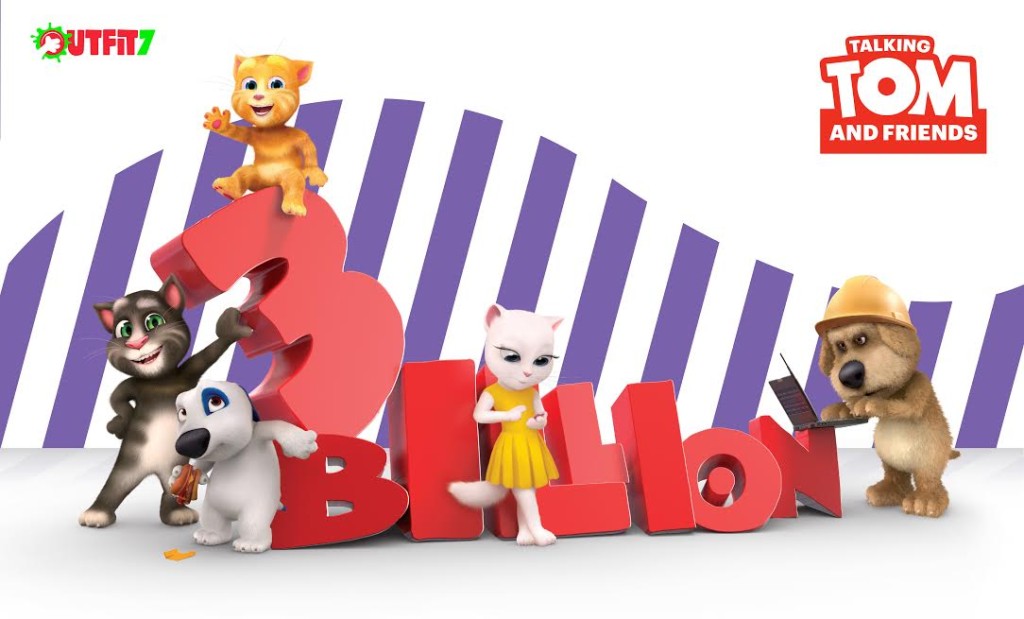 LONDON, UK: OCTOBER 13 – Three billion, three thousand million, or 3,000,000,000 – no matter how it is written, in which hemisphere or in what language – the number is astronomical. Today, Outfit7

Limited announced that it clocked in at just that – three billion downloads of its juggernaut Talking Tom and Friends app franchise.

In just over five years, and one year after crossing two billion downloads, Outfit7’s Talking Tom and Friends apps have set a new precedence for family entertainment in the digital space. Since the launch of the first Talking Tom app in June 2010, Outfit7 has built an entertainment brand encompassing over 15 apps under the Talking Tom and Friend umbrella, that continues to deliver fun and relevant content to its global fan base. Two of the most recent launches, My Talking Angela and My Talking Tom, both earned more than 10 million downloads within days of launch, while scooping the #1 games spot in over 135 countries.

Monthly, the apps collectively generate 250 million active users in over 230 countries and territories “It’s an amazing accomplishment to reach three billion downloads, but even more of an honor to know Talking Tom and Friends have entertained and delighted so many across the globe,” said Samo Login, Outfit7 Limited co-founder and Chief Executive Officer. “Thanks to our incredible team who work tirelessly to raise the bar in creative content and technology and continually deliver an entertaining and engaging experience, we’ve been able to reach this significant milestone.”

The app download stats tell just part of the digital whirlwind. Combined, the franchise has also amassed a whopping 3.5 billion views of its various content on YouTube, while Talking Tom and Friends: The Animated Series has cemented a rock solid audience accruing close to 100 million views since its launch on YouTube and the YouTube Kids app in late Spring . The 52×11-minute episode series features an all- star voice cast led by Golden Globe® and Emmy®-nominee Colin Hanks (“Fargo”) and Tom Kenny (“SpongeBob SquarePants.”) New episodes return beginning October 8th.

In addition, a feature film is in development, while the company’s global licensing and merchandising program continues to flourish.

The Talking Tom and Friends apps are free to download on all major app stores globally. For more information, or to download an app, please visit http://outfit7.com/our-work/.

Checkout Yumi playing one of Outfit7’s other game titles Mars Pop against gamers around the world.